FXAIX and SWPPX are two mutual funds from different issuers. But they both track the S&P 500 Index. With such a similarity in investing strategy, can one fund still be better than the other?

Let’s find out in this comparison.

What are some of the differences between FXAIX and SWPPX?

The good news is that both Fidelity and Charles Schwab funds have low expense ratios. In this case, they also charge the same yearly fee of 0.02% for their S&P 500 index funds.

Here’s an example: say you had $10,000 invested in FXAIX, it would cost $2 each year to cover the fund’s expenses. This is relatively low.

FXAIX is five times the size of SWPPX. The Fidelity 500 Index Fund has total net assets of 387 billion, while the Schwab S&P 500 Index Fund only has 68 billion under its belt.

Because of their underlying benchmark, their annualized returns are extremely similar. 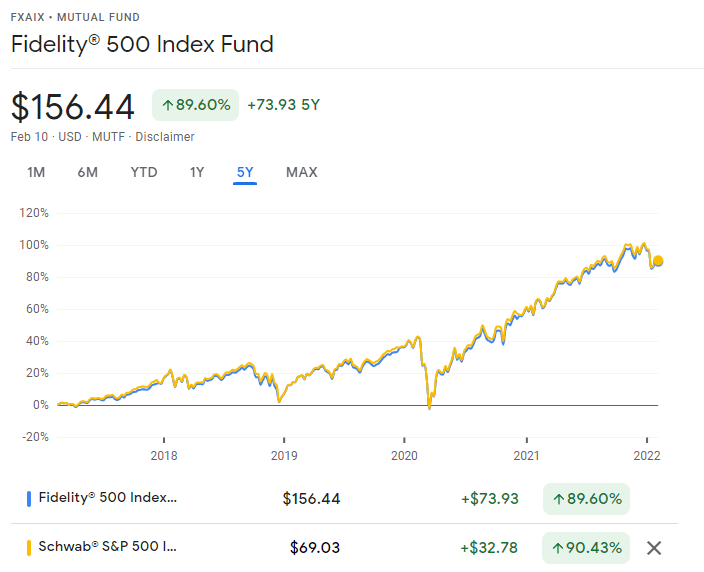 Which is Better, FXAIX or SWPPX?

In conclusion, it’s vital for potential investors to weigh all factors when deciding between two similar funds to invest in.

When comparing the Fidelity 500 Index Fund (FXAIX) and the Schwab S&P 500 Index Fund (SWPPX), it’s generally accepted that there is a no winner. They are both excellent mutual funds that give investors access to the 500 largest U.S companies.

The only time it makes sense to choose FXAIX over SWPPX is if you’re investing with Fidelity.

Fidelity customers will be charged a transaction fee when purchasing outside mutual funds in their brokerage account.