In this comparison, we will be looking at the difference between ARKK and FXAIX. The breakdown will include expense ratio, dividend distribution, top holdings, and more.

Is it better to buy a growth ETF or a mutual fund that tracks the S&P 500?

ARKK vs. FXAIX: What Are the Differences?

ARKK vs. FXAIX: How Are They Similar?

Unlike many comparisons we’ve done in the past, ARKK and FXAIX have more differences than similarities. Both funds may have some of the same stocks in their portfolios, but they are fundamentally different.

The ARKK ETF caters to investors with higher risk tolerance and a desire for higher returns than average index funds. FXAIX is more stable but may not give the above-average growth potential that some investors expect.

Which is Better? ARKK ETF or Fidelity 500 Index?

We asked our community of Fidelity investors and here’s what they have to say about ARKK and FXAIX.

ARKK invests primarily in “disrupter” companies. These are often high beta, pre-revenue, and are not suited for short-term investments. If you can stomach it, hold for at least 5 years and I believe you will be rewarded handsomely. 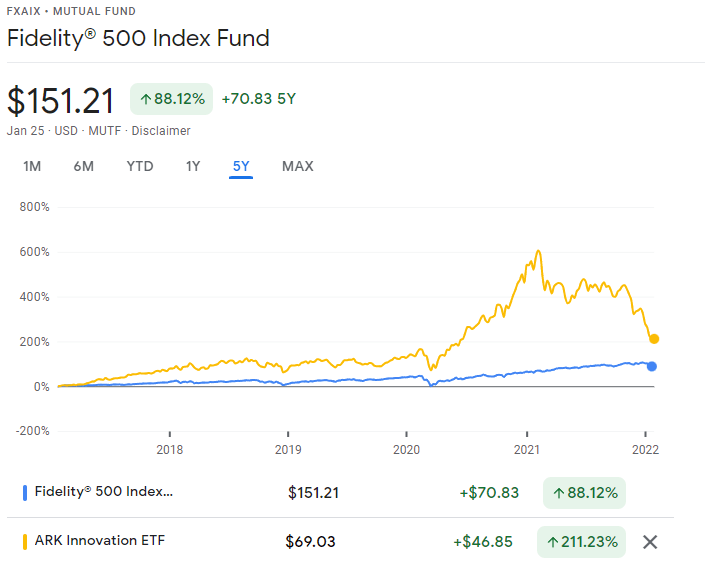 Suppose you’re “well into” your retirement. In that case, you might consider paring back risk unless you have a bond tent or some other volatility-resistant portion of your portfolio to rely upon during volatile times. I consider ARKK to be a risky investment. It is 3.32 times more volatile than the DOW Jones.

There are numerous ETFs that have a lower risk profile than ARKK. In general, ARK ETFs are hyper-focused on disruption and growth, which includes volatility risk. If you have other sources of funds and a longer investment horizon, I believe you will be fine, but no one can predict the future.

ARKK in the last year has lost -44.81% of its value. Great fund if you invested it at the lowest dip during the early pandemic and sold it in Feb of 2021.

Out of ARKK’s top holdings, I would only invest in TSLA. I think it is overvalued. If there is a major correction in TSLA stock price, the ETF price will be significantly affected.