I want to keep my portfolio simple, with no more than three good funds. And I’ve been looking into and researching FSPGX. I’m still new to investing, so I’m hoping I’m on the right track with this one.

FSPGX is a mutual fund from Fidelity that tracks the total return of U.S large cap stocks. About 80% of assets under management are invested in securities in the Russell 1000 Growth Index.

Both funds charge a relatively low yearly fee compared to other funds within the same category.

Morningstar placed FSPGX and FXAIX in its Large Blend category. This means these funds are most likely to have many overlapping stocks in their portfolio.

FSPGX pays dividends semiannually (June and December). It has a dividend yield of 0.53%.

FXAIX also distributes dividends semiannually (April and December). The fund has a dividend yield of 1.26%.

In the last five years, the Fidelity Large Cap Growth Fund has predominantly outperformed the S&P 500 Index. This is due to the fact that FSPGX only includes growth stocks, whereas FXAIX includes both growth and value stocks. 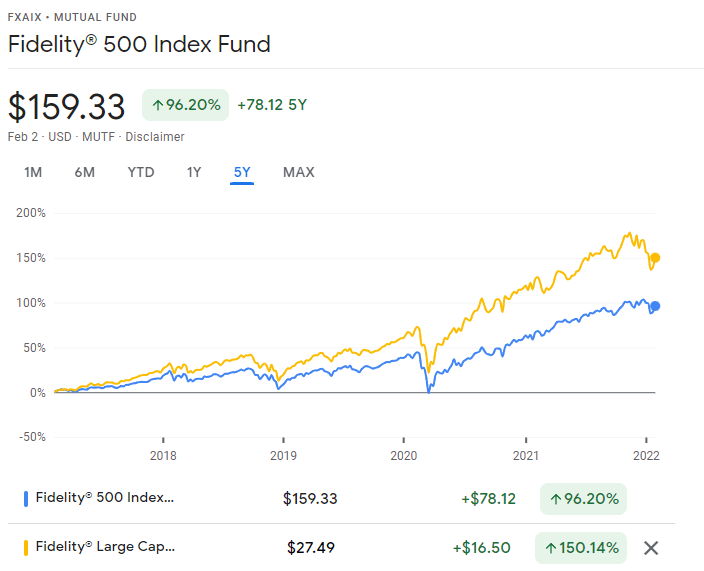 Which is Better, FSPGX or FXAIX?

The Fidelity 500 Index Fund (FXAIX) is a better investment than the Fidelity Large Cap Growth Index Fund (FSPGX). FXAIX has a lower expense ratio, which means that you will pay less in fees for owning this fund. It also has a longer history of performance, making it a safer investment choice.

That is not to say FSPGX is a bad investment. If you still have a long time before retirement and are okay with full exposure to growth stocks, investing in FSPGX can be rewarding.

FSPGX is the Fidelity equivalent of Vanguard’s VWUSX. I like FSPGX for growth because of its good returns and low expense ratio.

Yes. I have FSPGX as a substitute for VWUSX. It provides better returns than FXAIX. I’m also in FMDGX, which is also outperforming FXAIX. It seems like the holdings are similar but just overweight on mid cap vs large cap.

I hold FSPGX. It focuses on the growth companies that are in FXAIX SP500, versus the value companies. SP500 is a blend – it has both.

After looking at a lot of index funds, I chose FZROX because of it’s zero expense ratio. FSPGX actually has a better performance record.