FNILX vs. FZROX: Which Is the Better ZERO Fee Fund?

So I was thinking of going either FZROX or FNILX for my Roth IRA fund since 10 percent bonds is way too much for a 22 year old like myself, and the two funds above come up a lot during my questions.

Problem is, which one is better? I’m going to be retiring on this stuff in like 43-44 years, so whatever nets me the most dough is the one I’ll pick.

One more thing, how do you rebalance in a Roth IRA? Can you just transfer shares from a stock fund to a bond fund, do you sell it, or what? 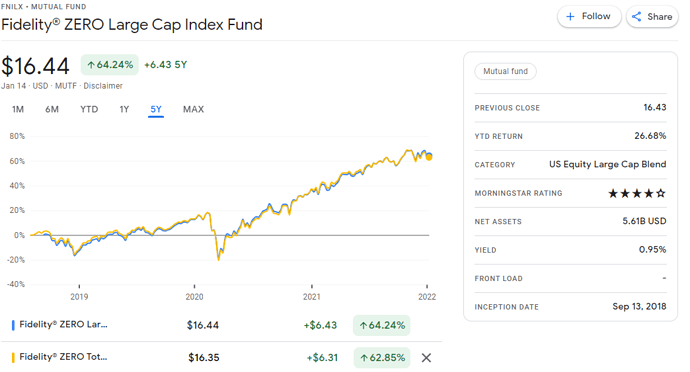 Which is better, FNILX or FZROX?

Both, FNILX and FZROX, are good. No way to know which will do better in the future. I have FNILX, it is just a basic S&P 500 fund, you will do what the market does.

FZROX a total market fund, which will give you some exposure to smaller cap stocks, but I would say that since it is a weighted index, the stocks in the S&P 500 will be the majority of the holdings, so the return will be rather similar. I don’t think you can go wrong with either.

Regarding your rebalance question, you just sell whatever you want and buy something new. Or if you are adding new money you can just let the account rebalance over time as you add more money.

FNILX and FZROX are almost the same. FZROX is the US Total Market, but allocation to mid-cap, small-cap is very small: 15%.

FZROX vs. FXAIX: What’s Better for a Roth IRA?
Vanguard vs. Fidelity Index Funds (2022): Which Is Best?
FSKAX vs. FZROX: What’s the Real Difference?
FNILX vs PREIX: Which One is Better?
FZROX vs SWTSX: What's the Difference?
FSPGX vs. FXAIX: Fidelity Growth Fund or S&P 500?
FBGRX vs. QQQ: Which one should you invest in?