FNCMX vs. QQQ: Which Is Better For Long-Term Investors?

FNCMX vs QQQ: What Are the Differences? 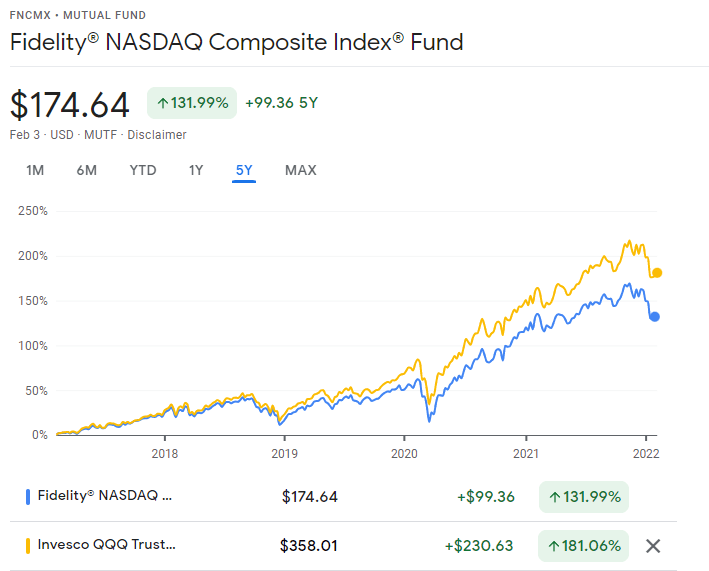 Which is Better, FNCMX or QQQ?

The Nasdaq 100 makes up more than 90% of the weight of the Nasdaq Composite Index. In a way, they are identical. It comes down to how diversified you want to be.

FNCMX is a good investment if you want to include the other 10% (primarily consists of financial companies) that the QQQ doesn’t have. Go with QQQ if you just want tech stocks and other growing sectors.

QQQ tracks the top 100 stocks in the Nasdaq, excluding the financial sector. FNCMX has many more holdings and is a little more diversified. That being said, QQQM is my biggest holding (same thing as QQQ but lower expense ratio).

Go with QQQM. They’re all the same thing, but QQQM has the lowest expense ratio. And I always go with an ETF over a mutual fund.

The composite index is much broader and has significantly more holdings than QQQ or QQQM. Though, I do use QQQM myself.

I’ve been reading that it’s better to hold the index funds in a taxable brokerage account rather than a Roth because of the low expense and turnover rates, where the higher rates of actively managed funds are absorbed in a Roth since taxes are paid upfront.

Look up the FTEC fund and compare it to QQQ or its equivalent. I prefer FTEC for its lower fee and higher annual growth.

An alternative to QQQ and FNCMX would be NDAQ, which is the actual Nasdaq company. It has similar returns to QQQ (often better) but with a higher dividend yield and no expense ratio since it’s an individual stock and not an ETF.

QQQM has much lower volume, liquidity, and fees. Lower fees mean you save some small percentage continually. But lower volume means you may get a worse execution on trades, which could fare better with QQQ unless you plan to hold long term.

Keep in mind that QQQ may not be as diversified as you think. Even though the Nasdaq 100 tracks the top 100, 50% of its market cap is Apple, Amazon, Facebook, Google, Microsoft, NVidia, and Tesla.