What’s this mean? And I do have the after hours toggle button on. Trying to buy after hours. 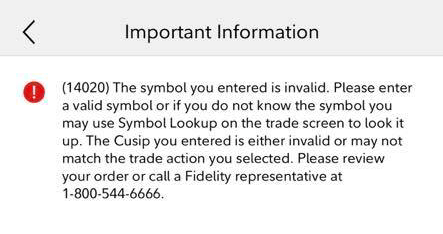 I’ve seen that pop up for me a few times two, during a after hours trading… I’m not sure if it’s a bug or what. I know for certain that the symbol that I typed in was correct, but I’ve seen this multiple times with the same symbol. I’m wondering if it has something to do with OTC stocks and after market hours… Because I don’t have the issue when I purchase the same symbol during market hours.

It has to do with their stop sign. They need to send financials or other docs in to get it removed. If you can purchase a penny stock on Fidelity, basically you know it’s somewhat credible.