I have a simple two-fund portfolio in my IRA. I have FXNAX as the bond portion at 40%. Wondering if I should sell that and move to a short-term bond fund instead – something like FSHBX. Thanks! 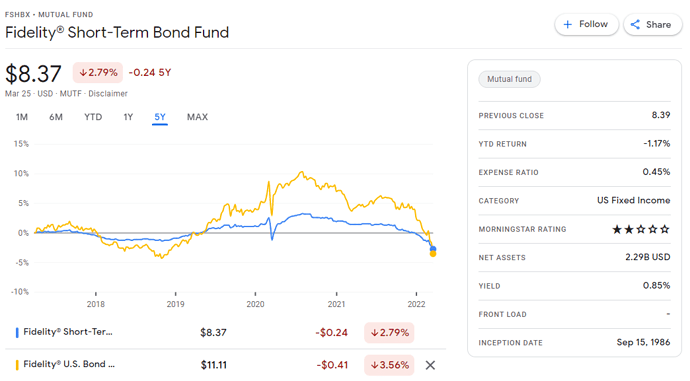 I would sell 15% of FXNAX and keep the proceeds in a money market account. After the next big drop in the stock market, invest the rest.

At first, it makes sense to lower the bond duration due to the rising environment. Still, as a believer in the efficient market hypothesis, the bond prices already reflect the hikes you are trying to avoid. So unless I need the money within 5 years, I will just leave it alone.

As long as your time horizon is longer than the bond fund’s average duration (for FXNAX, it’s 6.53 years), rising rates will hurt some in the short term but provide gains in the long term.

This is because the bonds within the fund are continually replaced—and will eventually be replaced with bonds with a yield proportional to the new interest rate environment.

I use FGAIX and have been wondering the same thing for the next 24-30 months.

BONDS continue to sell off, and nearly all bond funds have hit new 52-week lows today or have this week.

Meanwhile, the S&P is trading up almost 8% in a single week, despite Market Cap to GDP being nearly double the dot com bubble. Inflation is out of control, Russia’s uncertainty, rising gas prices, and wages being passed on to businesses.

If we get an inverted yield curve on yields, historically, that has been a bad sign of things to come- the last time it occurred was right before the financial crisis of 2008 and in 2019- followed by 80% of all US dollars in existence being printed between January 2020 and October 2021.

Whether you believe the rally will continue or that it will see an even bigger -20% correction, be careful and have a plan.