Anyone have an opinion regarding FCNTX (contra fund) vs. FBGRX (Blue Chip Growth) in 2022? Which is the better fund?

FCNT vs. FBGRX: What Are the Differences?

FCNT vs. FBGRX: How Are They Similar? 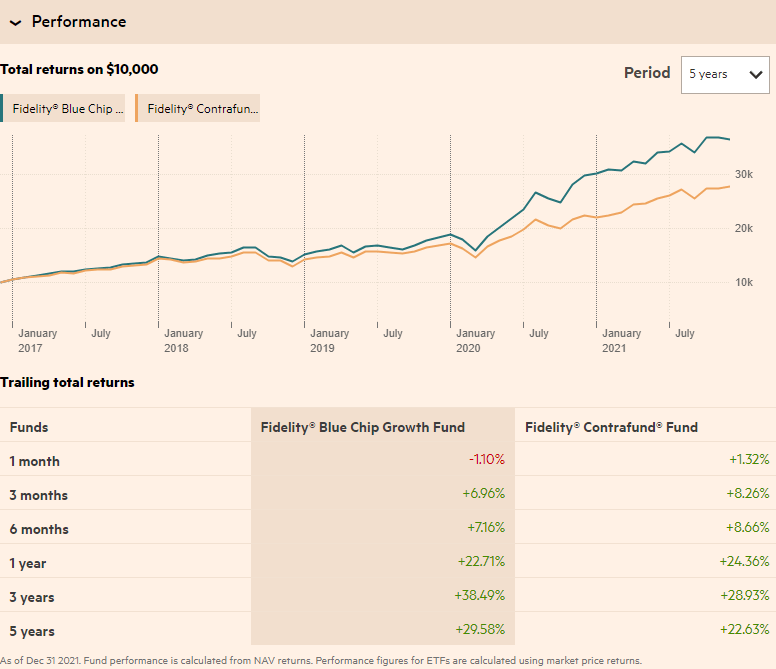 Is FCNTX Still a Good Investment?

We asked our community of Fidelity investors and here’s what they have to say about FCNTX and FBGRX.

I can tell you I have had FCNTX for at least 10 years and my growth is 98%, nearly doubling. I bought back then and held.

FCNTX is just a managed large growth.That said, FDGRX or FBGRX if you want same exposure with better returns. I left contra years ago and haven’t looked back.

I have had FCNTX for over 10 years. Don’t want to let it go just yet. But I also like FZROX!

Most of the money I have been putting in has been in Contra FCNTX through the years. I have also done some trading in a few stocks but not a lot.

I sold a lot of shares this year to buy other things. I still have good percentage of FCNTX in my portfolio. It isn’t a huge growth fund anymore, but it is a pretty safe one.

FBGRX has a similar composition and returns to FCNTX. I made the switch last year because I was tired of the high fee for contra fund.

I’ve held FCNTX fund since 2009 and it absolutely sucks. Sold a bunch a few years ago to buy $AYX, $TWLO, $PD and $CRWD and I’m up so much more with those than this fund. You can do better folks!